Previously published on The Travel Project by Contiki:
http://www.contiki.com/six-two/italian-biscuit-festival/#Ceart38I2Db340yZ.97

La Sagra della Nivola.  The Festival of the Biscuit.

Yes, it is as glorious as it sounds.

A nivola is a specific type of biscuit made in the region that my Nonna (Italian grandmother) was born.  Nivola is the name in dialect, and they are called ferratelle or pizzelle in Italian.

Basically, nivole are thin biscuits made in a waffle-shaped press (like a sandwich maker but smaller).  Behold:  https://www.google.com.au/search?q=ferratelle&source=lnms&tbm=isch&sa=X&ved=2ahUKEwiW4Ijm_4vaAhXCe7wKHQq4B-MQ_AUoAXoECAAQAw&biw=1280&bih=615

They are crunchy and delicious and you can smack two of them together with Nutella in the middle to create a godly sugar sandwich.  What is not to like about nivole?

Now, every year my Nonna’s village hold a festival for this amazing biscuit.  The festivities last for several days because it is in the same period that there are two saints’ days, so basically all the extended families return to the village to party on for at least three days straight.

It’s amazing, and it has long been my dream to be a part of these celebrations.  Not only are they freaking awesome and so much fun, but it’s part of my family history that I had never had the opportunity to experience.

Except for last year, when I was staying in Sorbo at the time of the Sagra.

The day began just as any normal day, except there was a buzz of excitement in the air.  As soon as I woke up, I could tell that this day was somehow intrinsically different.

Before lunch, I washed and plaited my hair in a half-up half-down style.  My little cousins were enthralled and within minutes, I had a line of five young girls waiting for me to plait their hair in similar styles.  I spent the next hour or so stopping at points in the village to play hairdresser, and I loved it.  The girls were patient and sweet, and it was a beautiful opportunity to sit down with them and just talk.  There is something indescribable about standing in your great-grandmother’s kitchen, gently plaiting your cousin’s hair while coffee brews on the stove and your aunt sews the final stitches into the skirt she will wear that evening.

The festivities didn’t begin until the late afternoon, at which stage there was a sudden rush to get everyone ready.  Classically Italian, I know.

Some of us were going to be in the procession – and yes, I mean a procession of biscuits, the nivole – through the streets of the village and down to the piazza.  All who were involved in the procession were dressed in hand-made outfits which reflected traditional farmers clothing, except probably with a little more sparkle.  This included, for the ladies, a long blue or red skirt with a matching vest, a white apron and a white veil.  The males wear long socks and matching black shorts and vests, and some wore hats.

As I was getting ready for the procession, my aunt walked into my room, a dark gown draped over here arm, and she handed it to me.  It was a dress which she had made for herself, but she insisted that I wear it, no questions asked.  I slipped it on and she tucked in my undershirt, clipping a few pins into place.  Then she picked up the lace veil and I stood still as she pinned it securely into my hair.

When she stepped back, I looked into the mirror and stared.  Wearing my aunt’s dress, I felt so incredibly privileged and special.  I was about to partake in something that I had always dreamed of, and it felt surreal.

With minutes to spare before the festivities began, we were rushed out of the house.  All those who were in the procession lined up in a side street while some of the adults organising the day partnered us up with each other in a long line.  We were given baskets to hold (yup, you guessed it – they were filled with biscuits) and there was a flurried air of expectation and excitement. 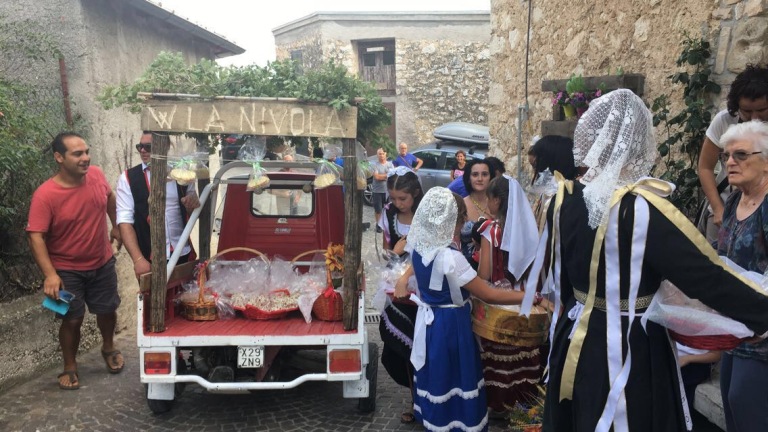 When we got the go ahead, we began to walk slowly through the streets, people crowding around us.  Loud music blared, the drumming reverberating off the stone buildings and through the cobbled streets.  We proceeded into the piazza, accompanied by the traditional music and the commentary and clapping of the villagers.  I was overwhelmed.  I felt like I was caught in the flurry of activity and music and sunshine, and it was glorious.

We lined up in the piazza and dancing ensued.  The children performed a traditional dance and everybody watched on, clapping in support.  There was music and laughter, and all I could really focus on was the ache in my cheeks from beaming so much.

When the performances were over, we congregated in the piazza to eat food and dance and sing even more.  I stood in the middle of the busy space, the Italian sun beating down on my already-tanned arms.

I was surrounded by family.  By my grandmother’s sisters, all trying to introduce me to someone or encouraging me to try this or that dish.  By my cousins, running around in their outfits and my now-messy plaited hairstyles.  By my aunts and uncles, shouting across the piazza to ask if I wanted beer or wine with dinner.  This Sagra, this festival, which for years was a glorious celebration which I had only ever known through photographs and stories, was now happening all around me.  And I stood in the centre of it all and loved every single moment. 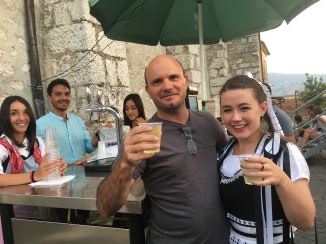